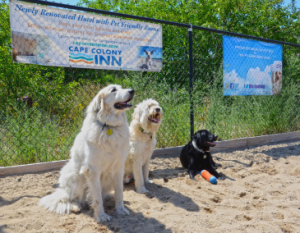 Looking for a dog-friendly attraction in Provincetown?  A place where your dog can run unleashed in the fresh air of a fully fenced park?  Check out Provincetown’s Pilgrim Bark Park!

The Provincetown Dog Park Association opened Pilgrim Bark Park in 2008 and since, the park has been voted one of the nation’s top dog parks. Minutes from pet-friendly Cape Colony Inn, Pilgrim Bark Park is located on an acre of land at the intersection of Route 6 and Shank Painter Road in Provincetown.  The park offers plenty of parking and is easily accessible from Route 6 (East).  Bark Park is open to the public—rules and regulations are posted at the park as well as below.

If you want your dog to run free, head over to Pilgrim Bark where dogs can socialize off leash.  If you have a tiny pooch, don’t worry, the park even offers a section exclusively for dogs under 25 pounds.

You’ll be amazed at the park’s beautiful artwork created by local artists—sculptures which include a large bronze whale’s tail, fire hydrants (painted to look like canine versions of Provincetown’s police officers, fire fighters and public workers), three-tiered water fountains, a small scale version of the Pilgrims’ Mayflower ship and more!  Poop bag stations, kiosks, signage and a super-sized doghouse are just some of the amenities.

Cape Colony Inn is a proud sponsor of the park and thanks to donations by Cape Colony Inn and other donors/sponsors, the Pilgrim Bark Park is continuously being improved!